Weird title right!  But after you ride this post you will understand the significance of a bicycle and a dumpster to this post.

Over the weekend, I was sitting in the airport in Columbus, Ohio catching up on the all the news from the past week.  One news story, that was covered by all the major stations, was the sexual assault of a young woman by a Olympic swimming hopeful from Stanford.  The story is tragic on so many levels, but for me to rehash the whole story again would be redundant.  So, as I was waiting on my plane, I decided that I would make some observations as a school counselor who has worked with many victimized girls and over idolized athletes.

Should we really be concerned about sexual assault as a school counselor?  Although the White House has taken a strong stand against sexual assault, it is still very common and accepted among our youth. If you are not convinced, check out these statistics from the Department of Justice.  In an article written for The Atlantic Magazine, the author quoted recent Department of Justice figures which indicate that one in six females and one in 33 males are sexually assaulted in their lifetime and every two minutes a person is sexually assaulted.  So, by the time I have written a few rambling words, about 15 people have been assaulted (unreal!).  So to answer my own question, sexual assault is a real issue in our society. But why?

Reasons for Sexual Assault Among Males

Psychologist Norman Shpancer wrote an insightful article for Psychology Today called “Why Do Men Sexually Assault Women”?  In that article, he pointed out three variables that may play into why men assault women:

1.  Genetics
Men are biologically stronger than women and can easily overpower them. However, the majority of men refrain from physical force even though they are much stronger.  That is good news!

2.  Glorification of violence
Our society is fascinated with violent sports, video games, and worship of super heroes in movies.  Think of the current music, movies, and attitudes in the media and how it may influence youth.

3.  Societal pressure
Although the first two reasons are very powerful influences on why men may assault women, there is a more powerful variable.  A more concrete reason for assaults among women stems from societal pressure or an internalized societal script on sex.  Dr. Shpancer says that men have a sexual script that has been taught to them by our society which says that women are objects and the sexual act on an object is justifiable.  If that object goes against that sexual script, then the object is subject to loathing and blame.  I think this short video from Face Book makes a important point about the victimization of the object and glorification of those who commit assault…check it out.

The Stanford Assault Case, a Dumpster, and a Bicycle

In this tragic story, we see all the factors that led to the sexual assault of this young woman. Without going into a lot of details, here is a brief overview of the story.  A college graduate accompanies her sister to a frat party.  The woman drinks too much, meets a young guy, finds herself waking up in the hospital with no recollection of her whereabouts the night before, and discovers that she was sexually assaulted behind a dumpster by the guy she met at the party.  The guy, who was a Ivy League Olympic hopeful, attended Stanford and was looking for a hook up at the party (these are his words, not mine). Following the assault,  he was arrested and plead guilty to the assault.

After several months, the case finally goes to trial and the college athlete is found guilty by a jury.  That should be the end of the story, right?  Well, the story really takes on a whole new persona when the father of the athlete writes a letter to the judge asking for leniency (which is understandable for a grieving parent).  In fact, the father perpetuates the objectification of the woman by reducing the act to twenty minutes of activity.  The father’s letter was a reaction to a powerful victim statement written by the victim known as Emily Doe.  Following the pleads of the father, the judge makes a decision that created public outrage. The judge, a Stanford alumni, reduces Turner’s sentence to a few months in jail and three years of community service.  While the outrage over the father’s letter and the judge’s sentence could be the focus of this post, I want to concentrate on two other characters in this tragedy who had a different societal script from Brock Turner, Turner’s father, and the judge. These two figures were passing by the party on bicycles when they noticed a young man on top of a motionless female by a dumpster.  Instead of riding off,  they approached the male and asked what he was doing.  Confronted by the two individuals, the assailant made an attempt to run away. Fortunately, that’s when the two individuals ran after Turner and held him until the police arrived.

Who were these two individuals?  They were not American youth, but two Swedish students who just happened to be riding by the frat party.  Instead of turning their backs and riding away, these young men recognized there was a possible sexual assault occurring and confronted the attacker. In my humble opinion, we need more boys on bicycles!!  Now, how do we create them in our society?

Why, as school counselors, should we be concerned about sexual assault?  Other than the fact that sexual assault is against the law and a violation of Title IX, it has a grave impact on our students.  Dr. Carolyn Stone found that students who experience sexual assault tend to suffer from eating disorders and depression, poor academic success, and may start using drugs and alcohol. RAINN found that youth who are assaulted may be:

Though I don’t have all the answers, I have a few closing thoughts that may be helpful to school counselors.

Circle of 6 Phone App – Although developed for college students, think about adapting the Circle of 6 App for your high school students.  Great idea for teens to have before Spring Break and/or prom.  The phone app allows a teen to text your friends in the case of emergency and asks them to come and get him or her.

For more information on the school counselors role as an advocate, check out my post on The School Counselor: Sexual Assault Advocate. This post can assist you in educating your students on how to stay safe. 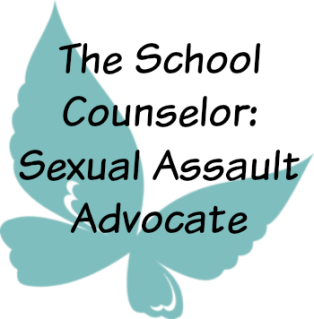 Oh, one more.  Teaching Tolerance has some great resources for educators that may be helpful as you are gathering additional information.

Training someone to ride a bicycle takes time, patience, and skill.  If we all work together, we can teach our young men to be boys on bicycles and not boys hiding behind dumpsters.

This site uses Akismet to reduce spam. Learn how your comment data is processed.